A taxi (also called a taxicab or cab in the United States) is a form of public transport. People who want to go somewhere pay the taxi driver to take them where they want to go. (In most other ways of public transport, the rider does not choose the pick-up and drop-off locations. Taxis are usually used in larger cities. 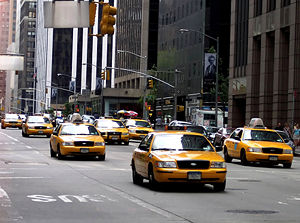 The first transport system like the modern taxi system started in Paris and London in the early 17th century. These were carts pulled by horses (carriages) and could be hired. The monarchies that ruled these cities controlled the amount of carriages. In the 19th century, Hansom cabs were mostly used because of their higher level of speed and safety.

The 1891 invention by German Wilhelm Bruhn of the taximeter (the familiar mechanical and now often electronic device that calculates the fare in most taxicabs) helped establish the modern taxi. The first modern meter-equipped taxicab was the Daimler Victoria, built by Gottlieb Daimler in 1897; the first motorized taxi company began operating in Stuttgart the same year.

Harry N. Allen, who imported the first New York taxicabs from France, coined the word taxicab as a contraction of 'taximeter cab'. In time, the shortened term taxi came into common usage. 'Cab' is a contraction of cabriolet, a type of horse-drawn carriage.

In turn, taximeter is an adaptation of the French word 'taximètre', which is a derivation of the German word 'taxameter', coined from Medieval Latin 'taxa' which means 'tax/charge' together with 'meter' from the Greek 'metron' meaning measure.[1]