Terrorism is the use of fear and acts of violence in order to Intimidate societies, governments or against an ideology. Many different types of social or political organizations might use terrorism to try to achieve their goals. People who do the terrorism are called Terrorests. The foundation of modern terrorism is the work of Sergey Nechayev, a Russian radical who developed strategies for carrying out terrorism. It also include politics.

It is difficult to explain terrorism. Terrorism has no official criminal law definition at the international level. Common definitions of terrorism refer to the violent acts which are intended to create fear (terror). They may be done for a religious, political, or ideological goal, and uses illegal violence.[1][2] Some definitions now include acts of unlawful violence and war. The use of similar tactics by criminal gangs is not usually called terrorism. The same actions may be called terrorism when done by a politically motivated group.

There are over 10000 definitions of "terrorism". In some cases, the same group may be described as "freedom fighters" by its supporters and "terrorists" by its opponents. The term 'terrorism' is often used by states to criticize political opponents. 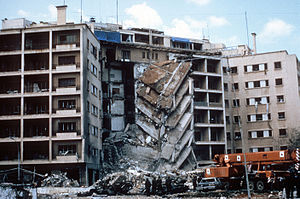 The US Embassy in Beirut after a terror attack

One form of terrorism is the use of violence against noncombatants for the purpose of gaining publicity for a group, cause, or individual.[3][4]

According to Memorial Institute for Prevention of Terrorism, terrorists killed 20,498 people in 2006. The major effect of terrorism comes from the fear which generates.