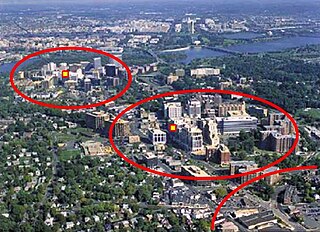 Aerial view of a growth pattern in Arlington County, Virginia. High density, mixed use development is often concentrated within 1/4 to 1/2 mile from the County's Metrorail rapid transit stations, such as in Rosslyn, Courthouse, and Clarendon (shown in red from upper left to lower right).

Arlington, Virginia is a county in Virginia. It has so many buildings that it looks like a city. It is one of the smallest counties in the United States by area. It is across the Potomac River from Washington, D.C., and parts of it were once part of Washington. 210,000 people live there. It where many U.S. government offices, including The Pentagon, are. It also the location of Arlington National Cemetery, which was built at the former plantation of Robert E. Lee. ANC is where John F. Kennedy and many American soldiers are buried. Several battles of the American Civil War were fought in and around Arlington.

The District of Columbia was made with land contributed by Virginia and Maryland. In 1846, Congress agreed to give the land south of the Potomac back to Virginia. Most of the returned land became Arlington.