Ronald Reagan Washington National Airport (IATA: DCA, ICAO: KDCA, FAA LID: DCA) is an airport near Washington, D.C.. It is in Arlington County, Virginia.[1] It is the commercial airport closest to Washington, D.C. The Metropolitan Washington Airports Authority (MWAA) is in control of the airport. It is named after 40th President of the United States Ronald Reagan.

Flights into and out of DCA cannot be longer than 1,250 miles (2,010 km). This rule is used to limit the number of aircraft over Washington. It causes most of the air traffic to be sent to the Washington Dulles International Airport which is larger and further from the city. There are some exceptions to this rule. In 2010, the airport served about 18.1 million passengers.[2] Reagan National is a focus city for US Airways. They are the airport's largest carrier. The US Airways Shuttle has air shuttle service to LaGuardia Airport in New York City and Logan International Airport in Boston, Massachusetts. Delta Air Lines' Delta Shuttle also has air shuttle service to LaGuardia. These shuttle flights leave Reagan International about once an hour.

Hoover Field was the first major terminal in the Washington area. It was near where the Pentagon is now. It opened in 1926. The airport had one runway. It crossed a local street. People were needed to stop automobile traffic during take-offs and landings. The next year, Washington Airport was opened next to it. It was another privately operated field.[3] In 1930, the economics of the Great Depression caused the two terminals to join to form Washington-Hoover Airport. The field was not very good. On one side of it was U.S. Route 1. This was a large highway which had electrical wires along it. There was also a smokestack that was in the way to one of the runways. A dump was also very close to the airport.

Thirty-seven studies done between 1926 and 1938 showed the need for a better airport.[3] No airport was built at the time because a law did not allow the federal government to build airports. Congress changed this in 1938. President Franklin Roosevelt had the ability to spend money while Congress was not in session. He used that power to spend $15 million to build National Airport. He used money that was to be used for other things. Construction of Washington National Airport began in 1940–41. It was done by a company led by John McShain. Congress did not think that what FDR did was legal. This did not stop the airport from being built.[4]

The airport opened on June 16, 1941.[3] In 1945, Congress passed a law that said that the airport was in Virginia but under the control of the federal government.[3]

The April 1957 Official Airline Guide shows that the airport had 316 weekday departures.

In 1977, the Washington Metro opened a station at the airport.[5]

The location of the runways is limited by the location of the airport. It has not changed much over time. One of the few changes was made in 1956. The fourth runway was closed. It was an east-west runway. It is now used just for moving aircraft and for parking them. The terminal building was made larger in 1958. The North Terminal was added. The two buildings were connected in 1961. A United Airlines building was built in 1965. Facilties for American Airlines were built in 1968. A commuter terminal was built in 1970.[3]

Although the airport has been made larger, there have been efforts to limit this. Because of the use of jet aircraft and the amount of traffic, Congress passed the Washington Airport Act of 1950. This caused the opening of Dulles Airport in 1962. Problems with noise caused noise restrictions to be made. This happened before jet aircraft use began in 1966. The Federal Aviation Administration put restrictions on National and four other airports in 1969 to limit problems with high amounts of traffic.

Transfer of control and renaming

In 1984, Secretary of Transportation Elizabeth Dole created a group to look into moving control of National and Dulles Airports from the Federal Aviation Administration (FAA) to a local groups. These groups could use the money the airports made to pay make them better.[4] The group felt that it would be better for one agency to be in control of both airports. The other choice was to have Virginia control Dulles and the District of Columbia control National.[4] In 1987, Congress gave control of the airport from the FAA to the new Metropolitan Washington Airports Authority (MWAA).[6] This groups choices were still under the control of a Congressional review panel. The constitutionality of the review panel was later challenged in the Supreme Court. The Court has twice said that it was not constitutional.[7] Even after this, Congress still takes control of the airports.[8]

Destinations with non-stop service from the airport. 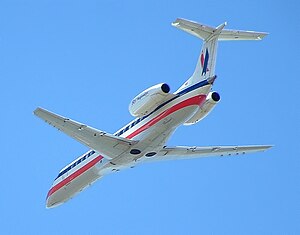 An American Eagle ERJ outbound from the airport (2006)

On the afternoon of January 13, 1982,[12] after some very cold weather and a morning of blizzard conditions, Air Florida Flight 90 crashed on take-off. It had been waiting forty-nine minutes on a taxiway and took off with ice and snow on the wings. The Boeing 737 aircraft could not gain altitude. Less than 1 mile (1.6 km) from the end of the runway, the airplane hit the 14th Street Bridge. It cut off the tops off vehicles and fell through the 1 inch-thick (25 mm) ice covering the Potomac River. The weather and traffic caused problems with helping the people on the plane. With the help of people in the cars, a United States Park Service police helicopter crew, and one of the plane's passengers who later died, five people on the plane were saved. The other 74 people on the plane died. Four people in the vehicles on the bridge also died.