KidzSearch Safe Wikipedia for Kids.
Jump to: navigation, search
For the anniversary of the beginning of the American Revolution, see Patriots' Day. For the Quebec holiday, see National Patriotes Day. 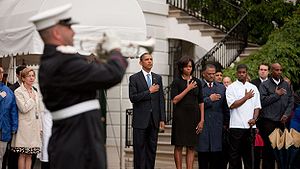 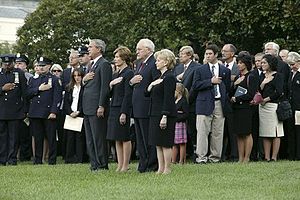 President George W. Bush and Vice President Dick Cheney on September 11, 2004 lead a moment of silence on the South Lawn with White House staff and families of victims of 9/11.

Patriot Day is a day of remembrance in the United States. It happens on September 11 of each year. It remembers the 2,977 killed in the September 11, 2001 attacks. Most Americans call this day "Nine-Eleven (9/11)," "September Eleventh," or something similar.

The day was officially created on October 25, 2001. The U.S. House of Representatives Joint Resolution 71 was approved by a vote of 407–0. The Resolution asked that the President would designate September 11 of each year as "Patriot Day." President George W. Bush signed the resolution into law on December 18, 2001 (as Public Law 107-89). On September 4, 2002, President Bush proclaimed September 11, 2002 as Patriot Day.

On this day, the American flag is to be flown at half-staff at individual American homes, at the White House, and on all U.S. government buildings, home and abroad. The President also asks Americans to observe a moment of silence beginning at 8:46 A.M. (Eastern Daylight Time). This is the time the first plane struck the North Tower of the World Trade Center on September 11, 2001.