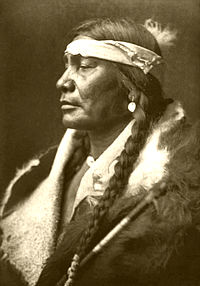 Sometimes these people are called Indians, but this may be confusing, because it is the same word used for people from India. When Christopher Columbus explored, he did not know about the Americas. He was in the Caribbean but thought he was in the East Indies, so he called the people Indians.

Native Americans introduced vanilla and chocolate to the world.

The ancestors of Native Americans came to the Americas from Asia. Some of them may have come to America 15,000 years ago when Alaska was connected to Siberia by the Bering land bridge.

The earliest peoples in the Americas came from Siberia when there was an ice bridge across the Bering Strait. The cold but mainly grassy plain which connected Siberia with Canada is called Beringia. It is reckoned that a few thousand people arrived in Beringia from eastern Siberia during the Last Glacial Maximum before moving into the Americas sometime after 16,500 years before the present (BP).[1] This would have occurred as the American glaciers blocking the way southward melted,[2][3][4][5][6] but before the bridge was covered by the sea about 11,000 years BP.

Before European colonization, Beringia was inhabited by the Yupik peoples on both sides of the straits. This culture remains in the region today, with others. In 2012, the governments of Russia and the United States announced a plan to formally establish "a transboundary area of shared Beringian heritage". Among other things this agreement would establish close ties between the Bering Land Bridge National Preserve and the Cape Krusenstern National Monument in the United States and Beringia National Park in Russia.[7]

Native Americans are divided into many small nations, called First Nations in Canada and tribes elsewhere.