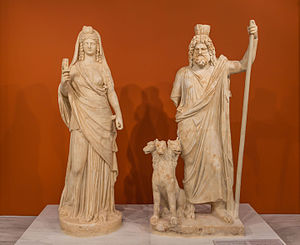 Group of ancient roman statues of Persephone (as Isis), Cerberus, and Pluto (as Serapis), from Gortys (Archaeological Museum of Heraklion).

Pluto is the god of the underworld in Roman mythology. Pluto was also the god of wealth because diamonds and other jewels come from underground.

A myth about Pluto is that he took Proserpina, who was the daughter of Ceres, to the underworld to be his wife. Ceres cried and did not let plants grow on the Earth. People needed the plants so much that the god Jupiter made Pluto give her up. The deal they worked out was that for six months, Pluto got Proserpina. While Proserpina was in the underworld, no plants could grow on Earth and it was winter. When Proserpina went back to her mother, it was summer. This was how the Romans explained the seasons. Pluto also had a three-headed dog named Cerberus that guarded the gates to the underworld.

The dwarf planet Pluto was named after this god.