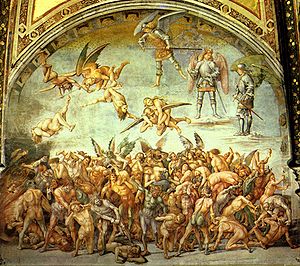 A fresco in the cathedral of Ovieto. This fresco is called The Condemned. It was painted by Luca Signorelli, about 1450.

In many mythologies and religions, Hell is a place where souls of dead people go after their lives end. It is often thought of as the opposite of Heaven, and a place where no love and no God is. In many religions, Hell is the place where the souls of dead people go if they have done evil things in life. It is used in the Old Testament to translate the Hebrew Sheol, and in the New Testament the Greek ᾅδης, Hades, and γεέννα, Hebrew Gehenna.

Many believe that Jews do not believe in Hell, but Jews really do believe. But it does not consist of eternal torture. Rather, there are lower levels of Heaven that a person can descend to considering the number of mitzvot (commandments) that they have obeyed. Gemorah writings tell the Jews of devil beliefs, but these are stories and are taken lightly. Jews also believe that Satan did exist, but he was an angel that quarreled with God, such as the story of Job.

In Hebrew the word for "the grave" is used for the place where people go when they die.

In Christianity, Hell is usually the place where the souls of people go who did not accept Jesus, or broke important rules set forth by God. In Hell, souls suffer and wait for the Last Judgement, a time when the souls of the dead will be judged by God. The concept of Hell in Christianity comes from the Bible and the "casting out" of Lucifer. In being cast out, he was removed from the presence of God. Therefore, if taken in its most literal sense, Hell is separation from God. Stated another way, to the Christian mind being separated from God is to be in Hell. Some Christians believe that Hell has real fire and flames, but others do not.

Other religions' beliefs about Hell