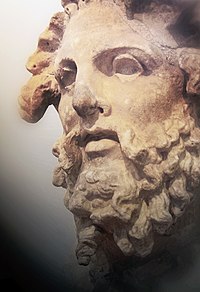 Head of a Titan, National Archaeological Museum of Athens

The Titans (Greek: Τiτᾶνες, Titânes - "Straining ones") were members of the second generation of immortal beings in Greek mythology. Though many beings were referred to as Titans in the myths, the term is usually used in reference to the twelve children of Gaia and Ouranos.

They ruled the cosmos prior to the Olympians, with whom they fought for control of the universe in a series of battles known as the Titanomachy. The Olympians emerged victorious, as many of the Titans were cast into Tartarus.

The first generation of Titans were the children of Gaia and Ouranos; known as the Ouranides or the Elder Titans, they were twelve in total. They were:

The second generation of Titans were mostly children of the original Twelve. These include the children of Okeanos and Tethys: the Potamoi, gods of rivers, and the Okeanides, who were three thousand in number, as well as the Nephelai, cloud nymphs.

Then there was the offspring of Koios and Phoebe: sisters Asteria and Leto.

Next came the children sired by Hyperion and Theia: Helios (the Sun), Selene (the Moon), Eos (the Dawn).

Afterwards came the sons of Iapetos and the Okeanid Asia/Klymene. Known as the Iapetionides, there were four of them: Atlas (the eldest), Prometheus and Epimetheus (who were twins), and Menoitios.

Last but not least were the children of Krios and Eurybia (daughter of Gaia and Pontus): Pallas, Astraeus, and Perses, the latter of whom would go on to marry Asteria, with whom he sired Hecate, goddess of magic and witchcraft.