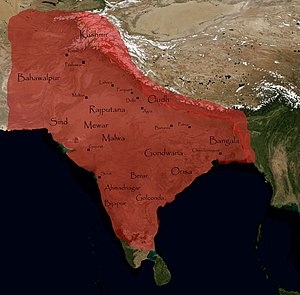 The Mughal Empire at its greatest extent ca. 1707

The Mughal Empire, (Hindi: मुग़ल साम्राज्य, Persian: دولتِ مغل) was an Sunni Islam empire in Asia which existed from 1526 to 1858. The Mughal rule over India is called an Empire because it stretched over a large area. When it was biggest it ruled most of the Indian subcontinent, then known as Hindustan, and parts of what is now India, Afghanistan and modern Pakistan and Bangladesh, between 1526 and 1707. Worth 25% of world GDP, it was the world's largest economy and it was well known for having signalled the proto-industrialization and for its lavish architecture.

The Mughal Empire was established by able Muslim rulers who came from the present-day Uzbekistan. The Mughal rule in India saw the country being united as one single unit and being administered under one single powerful ruler. During the Mughal period, art and architecture flourished and many beautiful monuments were constructed. The rulers were skillful warriors and admirers of art as well.

The Mughals left a permanent mark on the society, culture, art and architecture of India. Their monuments, artifacts and literature show a period of great wealth and culture. Paintings in miniature style teach us about the clothing and lifestyle of the Mughal people.

The Mughal people is an ethnocultural community (ethnic group) living in the Indian subcontinent. Descendants of the Mongol and Turkic conquerors who came to North India from the 14th century. Mongol, Turkic, and also local Indo-Iranian peoples took part in the formation of the Mughal people.

After 1858 when the Mughal Empire was taken by British, some of the upper class of Indian Muslims went to exile to the Ottoman empire. There Descendants today are named Muğallar (Mughals) in Turkish. They have become part of Turkish society and speak Turkish as their mother tongue.