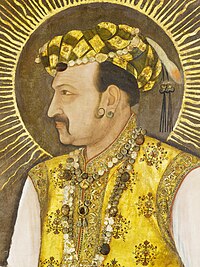 Jahangir was the eldest son of Emperor Akbar the Great. He was married to Queen Nur Jahan ('Light of the World') and was much under her influence. she handled court matters and coins were issued in her name. He is especially well-known because of his memoirs, the Tuzk-i-Jahangiri (also called the Jahangir-nameh by some).His eldest son was Shah Jahan. Prince Khurram,the future emperor Shah Jahan rebelled in the last years of his reign.The efforts of Nur Jahan,Jahangir's wife , to marginalize him were unsuccessful. In 1622, Jahangir sent his son Prince Khurram against the combined forces of Ahmednagar, Bijapur and Golconda. After his victory Khurram turned against his father and made a bid for power. As with the insurrection of his eldest son Khusrau Mirza, Jahangir was able to defeat the challenge from within his family and retain power. He died on his way back from Kashmir. After his death, Nur Jahan isolated herself and never talked to anyone.

He is buried at Shah Dara outside Lahore city, now in Pakistan. After his death, by his son and successor Shah Jahan came to power. Military campaigns started by Akbar continued.

He also consumed excessive amounts of alcohol and opium, at one point employing a special servant just to manage his supply of intoxicating drugs.