Electricity is the presence and flow of electric charge. Using electricity we can transfer energy in ways that allow us to do simple chores.[1] Its best-known form is the flow of electrons through conductors such as copper wires.

Electricity can be dangerous, especially around water because water is a form of good conductor as it has impurities like salt in it. Salt can help electricity flow. Since the nineteenth century, electricity has been used in every part of our lives. Until then, it was just a curiosity seen in the lightning of a thunderstorm.

It works like magnets, and in fact, electricity creates a magnetic field, in which similar charges repel each other and opposite charges attract. This means that if you put two negatives close together and let them go, they would move apart. The same is true for two positive charges. But if you put a positive charge and a negative charge close together, they would pull towards each other. A short way to remember this is the phrase opposites attract likes repel.

All the matter in the universe is made of tiny particles with positive, negative or neutral charges. The positive charges are called protons, and the negative charges are called electrons. Protons are much heavier than electrons, but they both have the same amount of electric charge, except that protons are positive and electrons are negative. Because "opposites attract," protons and electrons stick together. A few protons and electrons can form bigger particles called atoms and molecules. Atoms and molecules are still very tiny. They are too small to see. Any big object, like your finger, has more atoms and molecules in it than anyone can count. We can only estimate how many there are.

Because negative electrons and positive protons stick together to make big objects, all big objects that we can see and feel are electrically neutral. Electrically is a word meaning "describing electricity", and neutral is a word meaning "balanced." That is why we do not feel objects pushing and pulling on us from a distance, as they would if everything was electrically charged. All big objects are electrically neutral because there is the same amount of positive and negative charge in the world. We could say that the world is exactly balanced, or neutral. Scientists still do not know why this is so.

A drawing of an electrical circuit: the current (I) flows from + round the circuit back to - 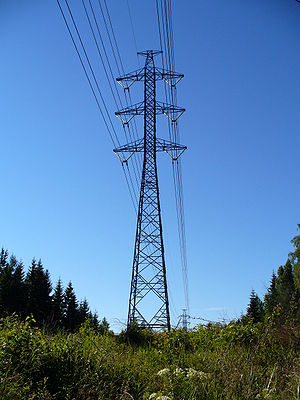 Electricity is sent on wires.

The electrons can move all around the material. Protons never move around a solid object because they are so heavy, at least compared to the electrons. A material that lets electrons move around is called a conductor. A material that keeps each electron tightly in place is called an insulator. Examples of conductors are copper, aluminum, silver, and gold. Examples of insulators are rubber, plastic, and wood. Copper is used very often as a conductor because it is a very good conductor and there is so much of it in the world. Copper is found in electrical wires. But sometimes, other materials are used.

A conducting wire used to carry electric current is often wrapped in an insulator such as rubber. This is because wires that carry current are very dangerous. If a person or an animal touched a bare wire carrying current, they could get hurt or even die depending on how strong the current was and how much electrical energy the current is transmitting. You should be careful around electrical sockets and bare wires that might be carrying current.

Here are a few terms that a person can come across when studying how electricity works. The study of electricity and how it makes electrical circuits possible is called electronics. There is a field of engineering called electrical engineering, where people come up with new things using electricity. All of these terms are important for them to know. 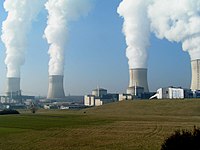 Electrical energy is made in power stations.

Electrical energy is mostly generated in places called power stations. Most power stations use heat to boil water into steam which turns a steam engine. The steam engine's turbine turns a machine called a 'generator'. Coiled wires inside the generator are made to spin in a magnetic field. This causes electricity to flow through the wires, carrying electrical energy. This process is called electromagnetic induction. Michael Faraday discovered how to do this.

Sometimes a natural flow, such as wind power or water power, can be used directly to turn a generator so no heat is needed.