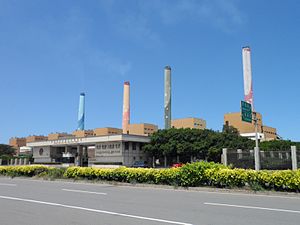 A power station (or power plant) is a place where electricity is produced. Most do this by a big spinning electrical generator. In big powers stations the spinning is usually driven by a steam turbine. The steam may come from:

Some do not use steam engines to spin the generator. Rather they use:

A few power stations use the sun's rays to generate solar power without motion. There are many power stations around the world, because many things need electricity to work.

These all use heat as a source of energy.

These sources have no moving parts. They are more expensive than generators, and are used where other questions are more important.