The Arab League is an organization made up of countries in the Arab world in Northern Africa and Southwest Asia. Most, though not all of these countries use Arabic as their official language. The purpose is to find ways for the countries to have unity and to work together to solve their problems.

The organization uses the Arabic Language in its summits and all official papers, although it has never been stated by the League that Arabic is the Official Language. The Arab League was founded following the Protocol of Alexandria signed in 1945 by seven Arab States: Egypt, Lebanon, Saudi Arabia, Syria, Iraq, Yemen, Trans-Jordan (Jordan). Today the League has 22 members. All countries having Arabic as an official language are among the members of the League, except for Israel, Eritrea and Chad which are not members. 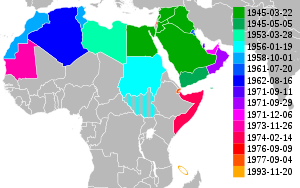 The countries in the Arab League are: