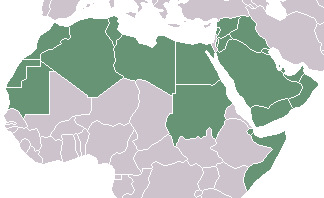 The Arab world (Arabic: العالم العربي; pronounced: al-`alam al-`arabi) are the Arabic-speaking countries stretching from the Atlantic Ocean in the west to the Arabian Sea in the east, and from the Mediterranean Sea in the north to the Horn of Africa and the Indian Ocean in the southeast. It consists of 24 countries and territories with a combined population of some 325 million people spanning at least 2 billion acres across two continents.