Cleansing of the Temple 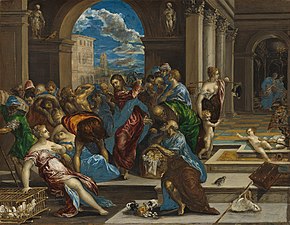 The cleansing of the Temple narrative tells of Jesus making people who sold animals leave the temple in Jerusalem. These people provided animals used in the Jewish rituals of sacrifice. Jesus also drove out the money changers. The temple required that only special coins be used to buy the animals or donate to the temple. Sometimes they were corrupt and cheated people who came to worship. Jesus says they are turning the Temple into "a den of thieves". [1]

The Synoptic Gospels tell of this happening near the end of Jesus' life. It was one of the reasons that the Jewish leaders opposed Jesus. The Gospel of John puts it near the beginning of the three year ministry of Jesus. This makes some Bible scholars think this happened two times and others think it refers to a single time.