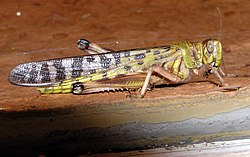 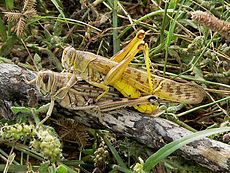 Locust are the swarming phase of certain species of short-horned grasshoppers in the family Acrididae. Such swarms are usually made of a great number of locusts. They do a lot of damage to the places where they pass, by eating the crops.

These are species which breed rapidly under suitable conditions. The migratory locust is the best-known example. They become gregarious and migratory when their populations become dense enough. They form bands as nymphs and swarms as adults. Both the bands and the swarms are nomadic and rapidly strip fields and greatly damage crops. The adults are powerful fliers; they can travel great distances, consuming practically all green material wherever the swarm settles.[1]

The origin and apparent extinction of certain species of locust—some of which grew to 6 inches (15 cm) in length—are unclear.[2]

Locusts are edible insects, and are considered a delicacy in some countries. There have been references to their consumption as food throughout history.[3][4]

In the Book of Joel in the Old Testament locust swarms are described as a plague.

More detailed information on locusts can be found at the pages of the Australian Plague Locust Commission.