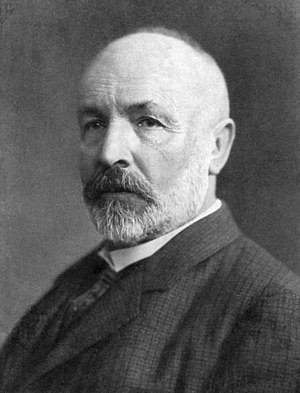 Georg Cantor, a famous 19th century mathematician suffered from depression, from 1884 to the end of his life.[1] Some people have suggested these problems may have been episodes of bipolar disorder.[2]

Bipolar disorder (also known as manic depression) is a form of mental illness characterised by repeated episodes of elevated (mania) and lowered mood (depression). It may occur with or without cycles of non-altered mood (euthymia). Mixed episode occurs when both mania and depression are present simultaneously.

Sometimes, a person can experience something called mania. Mania is when a person's brain goes into a high-energy state. The other extreme is a low-energy state that is depression. "Bipolar" literally means "two poles" or two extremes in how much energy the brain has. When in a high-energy state, mania can cause extreme emotions such as panic attacks or extreme happiness such as euphoria.

When a person with bipolar disorder is manic, they might not think as hard about the choices that they make, and sometimes may do things like give things to people, or spend lots of money. This is because during a manic episode, a lot of people start to believe things that are not really true, or get confused about what's real and what's made up. People can also become aggressive and possibly violent while manic, but this only happens in very, very bad cases, so it is not as common as some people think.

People who are in a manic state are often over-confident and very optimistic. This can cause them to take large risks and do things which are not wise. There are a few things that a lot of people start to believe when they have manic episodes. Sometimes, they might think they have lots and lots of money, when they really do not. Other times, the person who has a manic episode might think that people they knew are alive, even though the truth is that these people have died. When a person is in a manic state, they often speak quickly and / or loudly. Every person is different, so it is important to remember that these things do not happen to all people with bipolar disorder.

Bipolar disorder is an illness that can show in different ways. A few subtypes have been identified; these subtypes mostly describe the nature of the "episodes" of the disease: 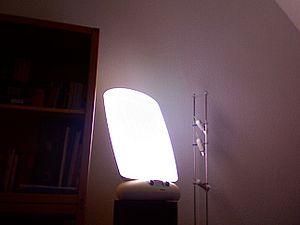 Light therapy is one of several approaches to treating bipolar disorder.

Like most mental illnesses, there are ways to treat bipolar disorder. Sometimes taking medicine or getting therapy can make it easier to control. The same treatments and medicines do not work for everyone, and it is not rare for people to have manic episodes when they stop taking their medicine because they feel like they can control their disorder. Things like this can make bipolar disorder a difficult illness to live with, but when people are educated about it, it is not quite as hard. Sometimes, people need to be given drugs against their will; depending on the state, patients may be thinking about suicide, or they may be unable to see their situation properly. In many cases, telling people about their disease helps. When they have gone through the phases of the illness a few times, they often see that treatment can make their life easier.

Certain drugs present in everyday life, such as coffee, tea or cigarettes can be bad for people who suffer from bipolar disorder:

Bipolar disorder used to be called manic depression. This was because the two symptoms were mania and depression. Now psychiatrists and psychotherapists (doctors who specialize in mental illnesses) consider bipolar disorder to be one illness in its own.