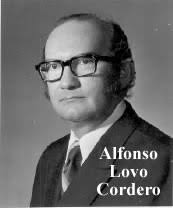 Lovo Cordero was a member of the Nationalist Liberal Party (NLP).