Exons and introns in pre-mRNA: forming mature mRNA by splicing. The UTRs are non-coding parts of exons at the ends of the mRNA. 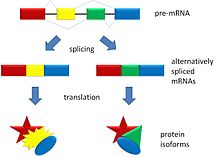 Alternative splicing allows DNA to code for more than one protein. It varies the exon make-up of the messenger RNA.

In alternative splicing the exons of the pre-messenger RNA produced by transcription are reconnected in different ways during RNA splicing.

This produces different mature messenger RNAs from the same gene. They get translated into different proteins. Thus, a single gene may code for multiple proteins.[1]

Alternative splicing is normal in eukaryotes. It greatly increases the diversity of proteins that can be encoded by the genome.[1] In humans, ~95% of multiexonic genes are alternatively spliced.[2][3][4]

Abnormal variations in splicing occur in disease. Many human genetic disorders come from splicing variants.[4] Abnormal splicing variants may also contribute to the development of cancer.[6][7][8] Non-working splicing products are usually dealt with by post-transcriptional quality control.[9] That is, they are chopped up by enzymes.

Alternative splicing (the re-combination of different exons) is a major source of genetic diversity in eukaryotes. One particular Drosophila gene (DSCAM) can be alternatively spliced into 38,000 different mRNA.[10]