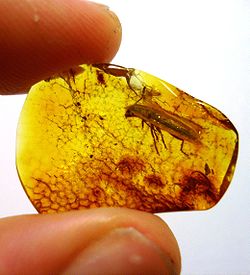 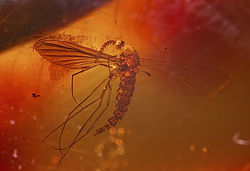 A mosquito in amber 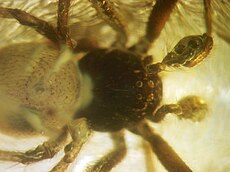 Amber is the common name for fossil resin. It occurs in different colours, and is widely used for making jewellery and other ornaments. Although not mineralized, amber is sometimes considered as a gemstone.

Most of the world's amber is in the range of 30–90 million years old. Semi-fossilized resin or sub-fossil amber is called copal. Baltic amber was called 'Freya's tears' by the Norse and the 'tears of the Heliades' by the ancient Greeks.

Amber consists of several resinous bodies that can mostly dissolve in alcohol, ether and chloroform, associated with a bituminous substance that does not dissolve.

Amber is formed from resin coming out of certain trees. It is not tree sap or gum. The resin soon becomes sticky, and later fossilises as amber. The amber can look different depending on its origin, and its later geological history.

To end up as amber, the starting resin must resist decay. Many trees produce resin, but usually it is broken down by physical and biological process. Exposure to weather tends to disintegrate resin, assisted by microorganisms such as bacteria and fungi. For resin to survive long enough to become amber, it must resist such forces, or be produced under conditions that exclude them.[1]

Baltic amber (historically called Prussian amber) is found as irregular nodules in a marine sand, known as blue earth, in the Lower Oligocene strata of Sambia in Kaliningrad Oblast, where it is now systematically mined.[2]

Agathis amber comes from the conifer Agathis, a tree that used to grow over a much wider area.

Amber from America and Africa often comes from the Hymenaea protera, a genus of legume tree.

The resin can contain, in addition to the beautifully preserved plant-structures, remains of insects, spiders, annelids, frogs,[3] crustaceans and other small organisms that became trapped while it was fluid. In most cases the organic structure has disappeared, leaving only a cavity, with perhaps a trace of chitin.

Amber can be found on all continents of the earth, with exception of the pole regions, mainly at the east coast of the USA, Canada, Burma, Mexico, Lebanon, Borneo, Romania and Sicily and other places. According to scientists, the oldest amber originates from the carbon time and has an age of approximately 345 million years (Upper Carboniferous, Northumberland, USA). There is Amber in Mexico and in the Caribbean, mainly in the Dominican Republic. But most of these offer by far a smaller yield than amber found in the Baltic Region around the Baltic Sea. Baltic amber is also the best known amber due to European history. Homer mentions it in his Odyssee, Book 15, 459-465, B.C.E.: “… a necklace of gold, with amber beads was it strung between…”. Amber from the "New World" like Mexico and the Dominican Republic was commercially mined only since the last century.

Baltic Amber is found along the shores of a large part of the Baltic Sea and the North Sea. The greatest amber-producing country is the promontory of Sambia, now part of Russia's Kaliningrad Oblast. About 90% of the world's extractable amber is in the Kaliningrad region of Russia on the Baltic Sea.[4]

This amber was deposited in the late Eocene and early Oligocene in a delta of a prehistoric river, in a shallow part of a marine basin.[5] In addition to the coast near Kaliningrad, amber is also found elsewhere in the Baltic Sea region.[5] Small amounts of Baltic amber can even be found outside the Baltic region, for example on the coastline of the south east of England.[5] On the evidence of Fourier-transform infrared microspectroscopy (FTIR) analysis of amber and resin from living trees, that conifers of the family Sciadopityaceae were responsible.[6] The only living representative of this family is the Japanese umbrella pine, Sciadopitys verticillata.

Resin from the extinct tree Hymenaea protera is the source of Dominican amber and probably of most amber found in the tropics. Dominican amber differentiates itself from Baltic amber mainly by being nearly always transparent, and it has a higher number of fossil inclusions. This has enabled the detailed reconstruction of the ecosystem of a long-vanished tropical forest.[7]

Amber is extensively used for beads and other ornaments, and for cigar-holders and the mouth-pieces of pipes. The Amber Room in the Catherine Palace near Saint Petersburg is notable. It is a reproduction of the original Amber Room, destroyed in WWII.

In Baltic countries, amber is often treated in autoclave, mainly to produce and enhance the colors and visual effects [8] thus creating beautiful jewelry. When gradually heated in an oil-bath, amber becomes soft and flexible. Two pieces of amber may be united by smearing the surfaces with linseed oil, heating them, and then pressing them together while hot. Cloudy amber may be made clearer in an oil-bath, as the oil fills the numerous pores to which the turbidity is due. Small fragments, formerly thrown away or used only for varnish, are now used on a large scale in the formation of "ambroid" or "pressed amber". The pieces are carefully heated with exclusion of air and then pressed into one mass by intense hydraulic pressure, the softened amber being forced through holes in a metal plate. As mentioned, the product is extensively used for making cheap jewelry and articles for smoking.

Amber was much valued as an ornamental material in early times, but also for religious purpose. Rosary beads are used by Catholics and Muslims alike up too our days. Around 58 A.D., the Roman Emperor Nero sent a Roman knight on a search for this “Gold of the North” and brought hundreds of pounds of amber to Rome. In later days, from 1283 on, the Teutonic Knights, after returning from the crusades, became absolute rulers of Prussia and the Baltic sources of amber, as well as the manufacture of objects made of amber, punishing transgressors with death by hanging. History has it that when they arrived in 1492 at the Caribbean island of “La Hispaniola” (Dominican Republic), Columbus received from a young Taino prince a pair of shoes decorated with Dominican amber, in exchange for a strand of Baltic amber beads that he had offered. [9]