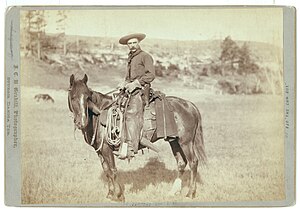 A Cowboy from the Wild West

The American Old West, or the Wild West means the history, geography, people, and culture of life in the Western United States. This often referring to the period of the later half of the 19th century, between the American Civil War and the end of the century.

This time is often shown in films like The Searchers, High Noon and Shane, in TV series like Bonanza and in fiction like Little House on the Prairie. Like other popular historical themes such as pirates and ninjas, the relationship between fact and fiction is complex.