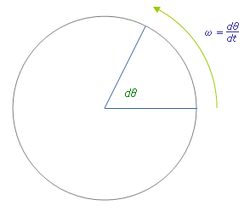 It is a vector quantity.[1] The SI unit of angular velocity is radians per second. But it may be measured in other units as well (such as degrees per second, degrees per hour, etc.). When it is measured in cycles or rotations per unit time (e.g. revolutions per minute), it is often called the rotational velocity and its magnitude the rotational speed. Angular velocity is usually represented by the symbol omega (Ω or ω). The direction of the angular velocity vector is perpendicular to the plane of rotation, in a direction which is usually specified by the right hand rule.