Description of the mechanism of a breech-loading swivel gun in Japanese. 16th century.

Artillery in Japan is recorded in the 13th century. It was not used widely before the Sengoku period in the 16th century.[1]

In the 1840s, the Tokugawa Shogunate began to anticipate that either British or French military might attack Japan. Takashima Shuhan (1798-1866) submitted a petition to the shogun calling for the purchase of Western firearms. In 1841, a demonstration of Western gunnery made a strong impression.[2] Powerful conservative factions in the shogunate resisted change.[3]

During the 1864 Bombardment of Shimonoseki, European naval guns were shown to be superior to Japanese cannon on shore.[4]

Following the Meiji Restoration, Japan would pursue a policy of "Rich country, strong army" (富国強兵), which led to a general rearmament.

Naval guns and field artillery were important in the Russo-Japanese War of 1905.

Before and during World War II, the Japanese Army deployed a variety of artillery pieces. 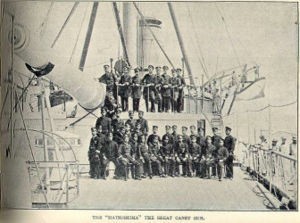 The French-built Matsushima, flagship of the Imperial Japanese Navy at the Battle of the Yalu River (1894), used a 320 mm (13 in) Canet gun.

The self-propelled artillery of the current Japanese military include