In this form of reproduction, a single organism or cell makes a copy of itself. The genes of the original and its copy will be the same, except for rare mutations. They are clones.

The main process of asexual reproduction is mitosis. This type of reproduction is common among some single-cell organisms, for example, amoeba. Many plants also reproduce asexually.

Some organisms like bacteria reproduce using binary fission. They split in two, so one bacterium becomes two bacteria. This always leads to daughter cells, and the offspring will be identical to the parent.

Budding is similar to binary fission, but it is used by plants and some animals, which cannot simply split in half as bacteria can. It is when a small part of a plant or animal breaks off and then, while they are separated from their "mother", they start to grow until both the "parent" and the "offspring" are the same size and both are capable of budding again. This may happen many more times.

Fungi (for example, mushrooms) produce spores, which may be asexual or sexual. The asexual spores have the genetic material inside, which allows them to make a whole new organism identical to its parent. 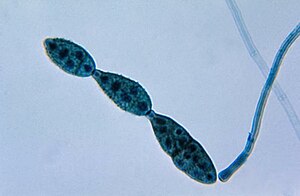 Chain of conidia of Alternaria

Conidia are asexual,[1] non-motile spores of a fungus; they are also called mitospores due to the way they are generated through the cellular process of mitosis. They are haploid cells genetically identical to the haploid parent, can develop into a new organism if conditions are favorable, and serve in dispersal.

Asexual reproduction in Ascomycetes (the Phylum Ascomycota) is by the formation of conidia, which are bourne on specialized stalks called conidiophores. The morphology of these specialized conidiophores is often distinctive of a specific species and can therefore be used in identification of the species.