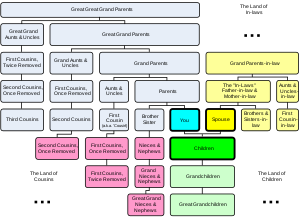 A chart showing the names for relationships in an extended family.

An aunt is a name used in an extended family. An aunt is either a sister of someone's mother or father, or a wife of your uncle. That person is the aunt's nephew (male) or niece (female). An aunt's child is that person's cousin. A grandaunt (or great-aunt) is the sister or sister-in-law of a grandparent.

An aunt can also be someone not related by blood or marriage as in a term of endearment or respect.