KidzSearch Safe Wikipedia for Kids.
(Redirected from B-36 Peacemaker)
Jump to: navigation, search 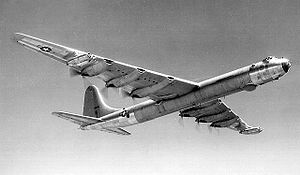 A Convair B-36 Peacemaker in flight

The B-36 Peacemaker was a strategic bomber. It was used in the United States. The B-36 could carry a 21,000 pound bomb. The B-36 was never used in wartime, but was in a movie called Strategic Air Command. The Peacemaker could fly for 48 hours non-stop and was one of the longest ranged bombers at the time. It first flew in 1948, and the last combat flight was in 1959.