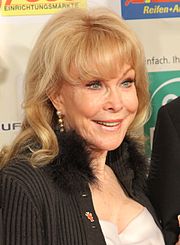 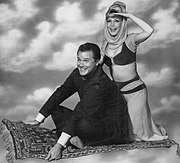 Actors Barbara Eden and Larry Hagman in the television series "I Dream of Jeannie" in 1965.

Barbara Eden (born Barbara Jean Huffman August 23, 1931[1]) is an American actress. She is best known for her acting in the sitcom I Dream of Jeannie. She has been featured in other television series. She was born in Tuscon, Arizona.[1] She was raised in San Francisco.