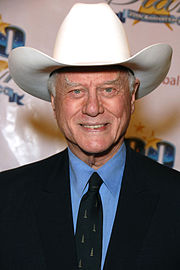 Larry Martin Hagman (September 21, 1931 – November 23, 2012) was an American movie, television, stage, and voice actor who is known for his role as J.R. Ewing in Dallas and as Major Anthony "Tony" Nelson in I Dream of Jeannie. His mother was actress Mary Martin. His father was of Swedish descent.

Hagman was born on September 21, 1931 in Fort Worth, Texas. Hagman was raised in Dallas, Texas. He studied at Black-Foxe Military Institute, at Weatherford High School, and at Bard University. Hagman was diagnosed with cirrhosis in 1992.[1]

Help Improve This Page: Please contact us to become an approved KidzSearch editor and provide your credentials. Provide feedback on this article in our Larry Hagman Forum