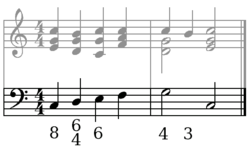 An example of figured bass: only the bass part (left hand) with the figures would be printed. The chords in the right hand show how it might be played. The figures give the intervals from the bass note up. If no figure is given the chord is a 5 3 chord (an ordinary triad)

Basso continuo is a form of musical accompaniment used in the Baroque period. It means "continuous bass".[1]

It was not usual to write out all the notes for the keyboard player.[1] The composer normally just wrote the bottom line which would be played by the bottom part of the left hand, and by the cello or whatever the instrument being used. The composer would indicate what the harmony should be (which chords should be played) by writing figures underneath the music. This is why it is called figured bass or sometimes thoroughbass. The continuo player will “realize” the figured bass i.e. he will improvise the chords which are shown. In modern editions of old music the figured bass part has normally been realized (written out) by the editor.

Reading music from a figured bass was a skill that all keyboard and piano players were expected to have. They needed to have a good understanding of music theory, especially of harmony. They would often improvise ornamental bits on top, but this had to be done musically and sensitively.

Basso continuo would accompany solo instruments and singers as well as instrumental groups.