This diagram shows the lowest and highest notes most organs can play.

In music, organ is a word that can mean several kinds of musical instruments. The word comes from the Greek ὄργανον organon, which means "organ", "instrument", or "tool".

Most organs are played using keyboards, one or more of which may be played using the feet. They are found and used in churches, concert halls, and even in theatres, especially older movie theatres or cinemas. A person who plays the organ is called an organist.

Here are some different types of organs: 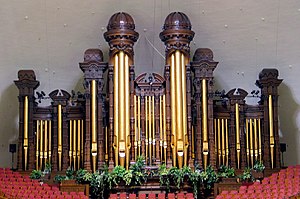 Pipe organs are the most common kind of organ, and many people mean this kind of organ when they use the word "organ". They sound different notes when air flows through pipes of different lengths and types. They take up a lot of room, and the noise they make are meant to fill large spaces.

The earliest pipe organs were water organs, which were powered by the flow of water, sometimes from a natural resource or using a pump. Later ones used foot pedals or hand cranks to pump a bellows, which in turn produces the air that goes through the pipes. These kinds of organs are still made today, and are called harmoniums. Today's pipe organs ones use an electric motor to move air, and some, like those in theaters, play different instruments as well. The Wurlitzer company was well known for making instruments that make different sounds.

A barrel organ in Frankfurt am Main, Germany that is loud enough to be heard at a fair.

Many public places have organs like this one that play music when someone inserts a coin into them.

Mechanical organs have a mechanism that controls which notes are played and when they are played. One type of mechanical organ is the barrel organ, which usually get their music printed on cardboard sheets, although some use piano rolls or a barrel similar to that of a carillon or music box. 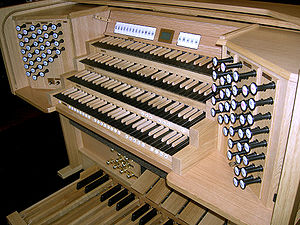 Electronic organs do not have pipes. This one is often used in churches instead of pipe organs. 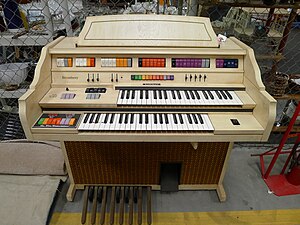 This electronic organ is one of those that make many sounds and can fit in people's homes.

The electronic organ is one of the newest types of organ. They use electronics to simulate the sound of a pipe organ and many other instruments. Because of this, they do not need to be very big and many are no bigger than a piano so that they can fit in homes, schools, or can be moved around as needed. They also do not go out of tune because it holds all its sounds on computerized chips. Many organists think they do not feel as good to play as a traditional, mechanical pipe-organ.

There are electronic organs that look and sound like those played in churches, and even many churches use electronic organs when they do not have the money or space for a full pipe organ. The best-known electronic organs include the Hammond organ heard in jazz, and other organs, like those made by the Japanese company Yamaha, are in fact synthesizers that can sound like a whole orchestra playing together. These types of organs are often used for music education, especially in Asia.