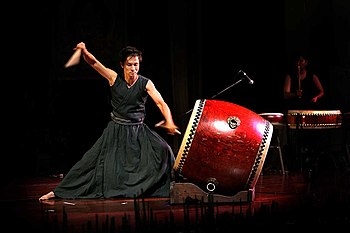 A beat is the basic unit of music . Beats can help measure tempos and are performed in grooves and rhythmic music. They measure the pulse and rhythm of a musical piece. They are usually divided into two kinds: stressed and unstressed beats. Stressed beats are the 'strong' beats and unstressed are the 'weak' beats. Time signatures and tempos are created by moving the beats into particular orders.

In music that is played in 4|4 time, (counted as "1 2 3 4, 1 2 3 4..."), the first beat of the bar (downbeat) is usually the strongest stressed in the melody and the likeliest place for a chord change. The third is the next strongest: these are the on beats. The second and fourth are weaker: these are the off-beats.

So "off-beat" is a musical term in syncopation that emphasizes the weak even beats of a bar, as opposed to the usual on-beat. This is a basic beat in African polyrhythm that was transferred over into popular western music. According to Grove Music, the "Offbeat is [often] where the downbeat is replaced by a rest or is carried over from the preceding bar".[1] The downbeat (the first beat of a measure in music) can never be the off-beat because it is the strongest beat in 4/4 time.[2] Certain genres tend to emphasize the off-beat; especially rock and roll and Ska music.