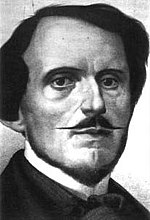 Bettino Ricasoli, 1st Baron Ricasoli, 1st Count of Brolio (29 March 1809 - 23 October 1880) was an Italian statesman. He was born in Florence. Ricasoli served as Mayor of Florence from January 1848 to November of the same year.[1] Member of the "Historic Right", after the Camillo Cavour's death Ricasoli became Prime Minister of the Kingdom of Italy. He was Prime Minister of Italy from 12 June 1861 to 3 March 1862 and from 20 June 1866 to 10 April 1867.[2] He was also twice Foreign Minister, twice Interior Minister and once Minister of War.[2].

In the last years of his life he was mayor of Gaiole in Chianti, a small town near Siena. Ricasoli died in his castle in Broglio, another village near Siena.[2] Ricasoli's private life and public career were marked by the utmost integrity, and by a rigid austerity which earned him the name of the "Iron Baron".[3] He was also a freemason.[4]