Bodiam Castle in England surrounded by a water-filled moat.

A castle (from the Latin word castellum) is a fortified structure made in Europe and the Middle East during the Middle Ages. People argue about what the word castle means. However, it usually means a private structure of a lord or noble. This is different from a fortress, which is not a home, and from a fortified town, which was a public defence. For about 900 years that castles were built they had many different shapes and different details.

Castles began in Europe in the 9th and 10th centuries. They controlled the places surrounding them, and could both help in attacking and defending. Weapons could be fired from castles, or people could be protected from enemies in castles. However, castles were also a symbol of power. They could be used to control the people and roads around it.

Many castles were built with earth and wood at first often using manual labour, and then had their defences replaced by stone instead. Early castles often used nature for protection, and did not have towers. By the late 12th and early 13th centuries, though, castles became longer and more complex.

Europe began using gunpowder in the 14th century. It did not stop castle building at first. But by the 15th century, shots became powerful enough to break through stone walls. Castles were still built, but new ways to protect castles from cannons and guns made them uncomfortable places to live in. Because of this, people stopped building true castles. Instead, country houses or military forts were built. From the 18th century, people began building castles again from new interest in Gothic architecture, but they were not used for fighting. 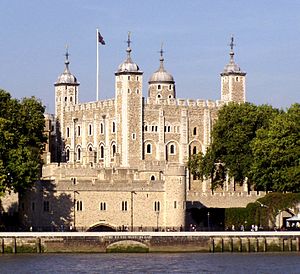 The Norman "White Tower", has all the uses of a castle: city protection, a place to live in, and a safe place in dangerous times.

The word castle comes from the Latin word castellum, which is a diminutive of the word castrum, meaning "fortified place". The Old English castel, French château, Spanish castillo, Italian castello, and many other words in other languages also come from castellum.[1] The word castle became a part of the English language soon after the Norman Conquest to describe this new type of building.[2] However, though these words all came from the same basic meaning, they can describe different types of structures. For example, the French château can simply be used to describe a great country house in the middle of an estate.[3]

A castle is seen by most to be "a private fortified residence" (place to stay).[4] This makes it different from earlier fortifications, such as walled cities like Constantinople and Antioch in the Middle East. Castles were not made to protect the community. They were built and owned by lords, either for themselves or for their ruler.[5][6]

Battlements along the top of a tower.

A castle's main defense was a wall. A wall was used to block the offensive side from breaking into a castle. The rooms inside the castle sometimes had small holes, or slits, cut in the walls, so the soldiers could fire out through them without being hit. These were called arrowloops. The way a person or thing got into a castle was through a gate. A gate was a mostly wooden structure with a heavy metal gate behind it. This was used for two purposes: to let allies in or out, and to keep enemies out. If an attack did get past a gate, missiles and other objects would be dropped through holes (called murder holes) in the upper part of the gate. The gate was also one of the most protected parts of a castle. Some castles also had moats which were water filled ditches encircling the whole castle where the only way in was over a drawbridge which was a heavy wooden door that could be pulled up by chains to protect the main gate and let down to act as a bridge over the moat to allow access to the castle. You could also pour oil that was hot down a hole. The soldiers attacking the castle sometimes tried to knock down the castle walls, or dig under them. A siege was when the attackers just sat outside and waited. When the people inside were starving they had to give up and come out, which is called surrender. A siege could go on for months, if the castle had plenty of food and water.

Castles were built for defense until about 500 years ago, at the end of the Middle Ages. After that people still built very big stone buildings. They looked like castles, but they had bigger windows and more fireplaces and were much more comfortable. Really they were just great big houses. When castles were built to be homes instead of fortresses, the word 'Castle' was often put at the front of the name. One example is Castle Oliver in Ireland. This had 215 windows and 65 chimneys, as well as dozens of bedrooms. It was built about 150 years ago. It is very light and bright inside, because it was built to have parties, not to keep out soldiers.

Many castles are very beautiful and are public. Sometimes you can see furniture and clothes, armour, musical instruments, carpets, cannon and other weapons that once belonged to the people who lived there. Some castles have legends of ghosts. Some had very famous owners, like mad King Ludwig of Bavaria. Some, only a very few, are still lived in by the families who built them. Many others have become hotels or museums.

Castles seem romantic and mysterious to us now, but they were cold, dark places to live, often damp. Because the walls were so thick, sometimes 12 feet (4 metres) or more, they never got warm. Their windows also had no glass in them. Castles might have been safe, but they weren't very comfortable.