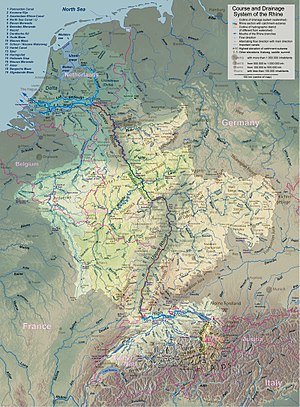 A map of the River Rhine

The river runs through only one lake on its way, Lake Constance, which is on the border of Switzerland, Germany and Austria.

Along the banks of the Rhine are several castles which notorious robber barons lived in during the 15th–18th centuries. Before the Industrial Revolution hit Europe, and factories set up along its banks and emptied all their waste into the River. The Salmon left and every living thing died. Then after World War II, the Rhine Action Programme was set up to boost the Rhine's wildlife and reduce the pollution there.

Together with the Danube it formed most of the northern frontier of the Roman Empire.

Cities near the Rhine

These are large cities that are found near the Rhine:

Smaller cities that are found near the Rhine: