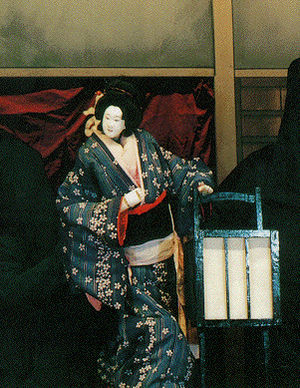 The character Osono, from the play Hade Sugata Onna Maiginu (艶容女舞衣), in a performance by the Tonda Puppet Troupe of Nagahama, Shiga Prefecture. 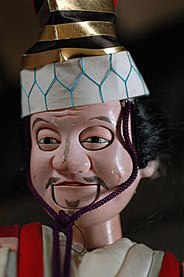 Close-up of a male puppet's head with mechanical eyes. This particular puppet is a head used in sanbaso performances. 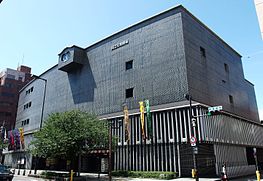 Bunraku, also known as Ningyō jōruri, is a Japanese puppet theatre, founded in Osaka in the 17th century. It was mainly related to kabuki from Genroku period. Bunraku developed in Edo period combining puppet art with joruri. Bunraku has the narrator with puppets and the action is accompained by a game on the shamisen.

The most famous Japanese bunraku playwright is Chikamatsu Mozaemon. His most famous work is The Love Suicides at Sonezaki.

Originally the term bunraku referred to theatre founded in Osaka in 1805.