Kabuki is the traditional Japanese classical drama which started about 400 years ago. It is known for its very stylized acting and the elaborate makeup worn by the actors. The word kabuki means "singing and dancing". It also means strange and different, to be outside what is normal. Kabuki is not meant to look like real life.[1] People from around the world are now interested in Kabuki. It was recognized by UNESCO in 2006 as an important part of Japan's cultural history.[2]

Kabuki theater started during the Edo period (1603—1868), but it really developed into what we now know as kabuki during the Genroku (1688—1704). Kabuki was started by a woman, Izumo no Okuni, who performed in the dry river bed in Kyoto in 1603. It was very popular, especially because many of the stories and dance moves were about sex. Women were banned from performing in Kabuki plays in 1629 because it was thought to disturb discipline. They were replaced by beautiful young men to play the female roles, but in 1652 they were banned for the same reasons as the women. Kabuki was allowed to continue with adult men playing all the roles, Yaro kabuki, which is the style that has became famous.

After the Genroku era, Kabuki became popular in Japanese cities, growing rapidly as proper theater due to great authors and actors. Ningyo Jyoruri (the puppet theater) also influenced the stories, directions, content and rich style. Ballet and theater music, such as Nagauta, Tokiwadubushi and Kiyomotobushi were also influences on the development of kabuki. After the restoration of the emperor in 1888, kabuki was influenced by foreign culture, and it was stimulated by new theater such as rise of new drama.

In Showa period, from 1926 to 1989, performances began in other countries. Also the Empire Theater was reconstructed, and called the National Theater. In 1954, East Side Theater was made, and Kabuki stage relied on TV. In 1965, Kabuki was seen as an important cultural heritage. After World War II, the Japanese came to see that Kabuki as an important part of their culture. Many famous actors became famous people in Japan.

Kabuki theaters are very unique. In the Genroku era, kabuki was influenced by nou or kyougen which were the theater styles made before kabuki. In this period there was no roof for audiences, so that if it rained, actors could not perform. In the Edo period, all seats were covered with a roof.

Mawari-butai, a revolving stage, began in the Kyōhō era (1716–1735). Scenes are built on the revolving stage and when a new scene is needed they simply rotate the stage; it makes progress of plays move quickly and easily. Foreign theaters have copied this kabuki invention.

Other unique system is hanamichi or "flower path". This is a walkway which crosses the auditorium at the same height as the stage. Actors can use this walkway to enter or leave the stage. During a play it can become many kinds of places. For example, it can be a river, a road, a corridor and so on.[3] 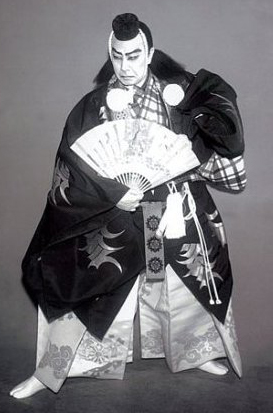 Woman kabuki actors are rare though there was onnakabuki. The onnakabuki is woman’s kabuki. But women performing kabuki was believed to corrupt public morals. The shogunate prohibited the woman from performing in 1629. And kabuki actors became only the men in 1652. Now the men play both male and a female roles.

The name of a kabuki actor usually is passed on from one generation to the next. Therefore the name of an actor is passes to the next generation. Kabuki actors do not perform only kabuki but also act in TV drama and movies. Koshiro Matsumoto often appears on TV.

Gidayu kyogen or Maruhonmono are kabuki plays that were first written as puppet plays. They were turned into kabuki plays when they became famous. Shin kabuki are plays which were written by writers who did not normally write kabuki plays. 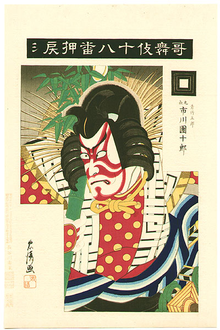 Kabuki makeup helps audiences understand each character's role. It is special and emphasizes beauty of form. If an actor plays the role of a daughter or a man in love, he must apply makeup. First, he rubs grease, which is made of canola oil and perfume, into his face. Second, he paints out eyebrow with grease. Third, he rubs face powder on chest, neck, long hair and spreads powder with sponge. Next, he rubs face powder on face with sponge. Also, he puts rouge on nose, eyes cheek and the outer corner of the eye. He paints his eyebrow from red to black and he rubs lip with red lip stick and traces the outline clearly.

If the actor is playing a brave man, called Aragoto, he paints on rouge with red and black lines, Kumadori, to show brave feelings. Kumadori is a type of kabuki's make up. It was started in 1673 by Danjyurou Ichikawa. It shows the character's role, for example, Sujiguma is one of the kamadori showing a super hero.

Modern Japanese has a lot of words that came from kabuki words. For example, there are three famous words; the first is an ohako. Ohako means skillful things. Japanese often say the ohako is own good tune with karaoke. The ohako is derived word from Danjuro Ichikawa. He kept the kabuki plays of his good kabuki in a box. The ohako originated in there.

The second is a nimaime. The nimaime means a good-looking man. The nimaime was written secondarily from the right in the signboard of the kabuki. Therefore it came to be said so.

The third is a sanmaime. The sanmaime means a comedian. The origin of this word is the same as nimaime, sanmaime was written third from the right in the signboard of the kabuki. 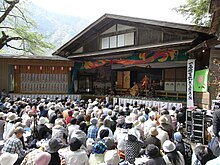 Now Kabuki actors often perform for foreign audiences. The group Heisei Nakamuraza directed by Nakamura Kanzaburou have become famous for their performances in foreign countries.[6] They were the first traditional style kabuki group to perform in New York City in 2004, with actor Nakamura Kankuro V. Using a tent as a playhouse near opera house, with the audience seated on tatami (Japanese mats), they performed "The Summer Festival: A Mirror of Osaka" with Japanese actors.[7] In July 2008, Heisei Nakamuraza again performed in New York and they played in English. It was a historical and splendid achievement.

In Australia, the Za Kabuki group at the Australian National University has been performing a kabuki drama each year since 1976; the single longest regular kabuki performance outside of Japan.[8]