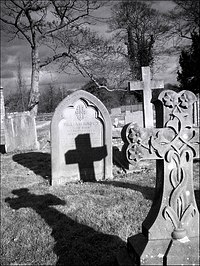 Headstones in a cemetery

Human bodies are usually buried in a cemetery. It is common practice in many places to put bodies into a coffin and place the coffin into a grave. The grave is then usually marked with a headstone so that people know who is there and can visit them.

In the past, often during times of war, many bodies have been placed into the same grave without coffins. This is called a mass burial or a mass grave.