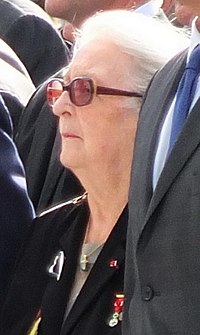 Cécile Rol-Tanguy (10 April 1919 – 8 May 2020) was a French communist. She was a Resistance fighter during World War II. She was active in the liberation of Paris. She was secretariat and a liaison officer, in charge of operations and confidential communications. She was born in Royan, Saintonge.

In 2008, Rol-Tanguy became the Grand Officer of the Legion d’Honneur.