Cabell "Cab" Calloway III (December 25, 1907 – November 18, 1994) was an American jazz musician and actor. He was famous for his "scat" style singing. He was the leader of one of the most famous big bands in the 1930s and 1940s. Calloway's band featured many famous musicians including Dizzy Gillespie.

In his later career Calloway became a popular actor in movies and stage shows. In 1980 he acted and sang in the movie "The Blues Brothers." In the movie he sang "Minnie the Moocher." He sang the song "The Jumpin' Jive" on the famous children's TV show Sesame Street. 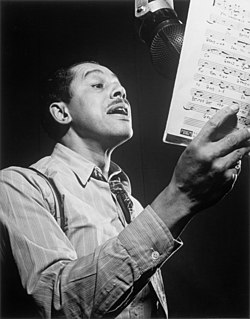