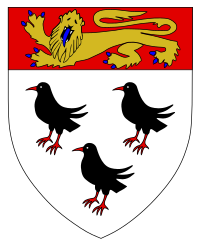 Coat of arms of Canterbury

Canterbury is a city in Kent, England. It is about 60 miles (97 km) from London. It was made famous by a book called The Canterbury Tales. It is also famous for Canterbury Cathedral. Thomas Becket was assassinated by knights who came from Sandlings.

There are two railway stations in the city; Canterbury East and Canterbury West. The A2 road passes near the city. It goes west to London and south-east to Dover.

The city has an estimated 31,000 students. This is the highest student/permanent resident ratio in the UK.[1] There are three universities, and several other higher education institutions and colleges. At the 2001 census, 22% of the population aged 16–74 were full-time students, compared with 7% throughout England.[2] The three universities: the University of Kent, Canterbury Christ Church University, and the University for the Creative Arts.

The St Lawrence Ground is the home ground of Kent County Cricket Club. It has hosted several One Day Internationals, including one England match during the 1999 Cricket World Cup.[3]

The Canterbury area has been lived in since prehistoric times. Paleolithic stone axes, and Neolithic and Bronze Age pots have been found in the area.[4] Canterbury was once the main settlement of the Celtic tribe of the Cantiaci, which lived in most of modern-day Kent. In the 1st century AD, the Romans captured the settlement and named it Durovernum Cantiacorum.[4] The Romans rebuilt the city, with new streets in a grid pattern, a theatre, a temple, a forum, and public baths.[4] Its position on Watling Street on route to the major Kentish ports of Rutupiae (now Richborough), Dubrae (now Dover), and Lemanae (now Lymne) made it important.