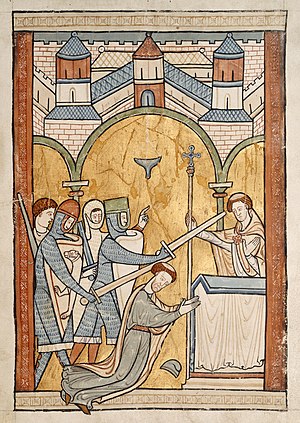 Thomas Becket was an English priest, and Archbishop of Canterbury, who was killed by four knights with their swords in Canterbury Cathedral in 1170. People used to think his name was Thomas á Becket, but it is now known to be wrong. [1]

Becket was born in Cheapside, London. He was intelligent when he was a child. He also enjoyed playing sports, such as hunting. At age 16, he left for Paris to study. [2]

In 1143, Becket joined the household of Theobald, as a clerk. He became Archbishop of Canterbury in 1162. He was a close friend of King Henry II, but they argued about the rights the Church could have. He was killed by four followers of the King on 29 December 1170. However, evidence shows that the King had no knowledge of the murder. English stories say that he went around Canterbury being whipped as punishment for the murder of his close friend.

Becket became a saint in 1173. His major shrine is in Canterbury, but was destroyed by order of Henry VIII during his reign.