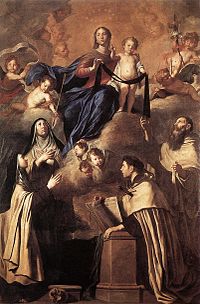 The Order of the Brothers of Our Lady of Mount Carmel or Carmelites (sometimes simply Carmel; Latin: Ordo fratrum Beatæ Virginis Mariæ de monte Carmelo) is a Roman Catholic religious order. It was founded in the 12th century on Mount Carmel, from which the order receives its name. Saint Bertold has traditionally been associated with the founding of the order, but few clear records of early Carmelite history have survived.