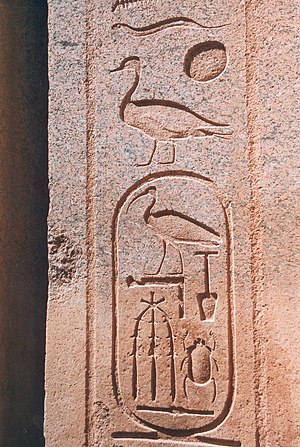 A cartouche is a hieroglyphic symbol of an ancient Egyptian pharaoh.[1] It is oval with a horizontal line at one end, showing that the text enclosed is a royal name.[1]

It starts to be used at the beginning of the Fourth Dynasty under Pharaoh Sneferu. The cartouche is usually vertical with a horizontal line, but it is horizontal if it makes the name fit better, with a vertical line on the left.[2] The Ancient Egyptian word for it was shenu. In demotic writing, the cartouche was reduced to a pair of brackets and a vertical line.

Of the five royal titles it was the prenomen, the throne name, and the "Son of Ra" titulary,[3] the so-called nomen name given at birth, which were enclosed by a cartouche.[4]

At times amulets were given the form of a cartouche displaying the name of a king and placed in tombs. Such items are often important to archaeologists for dating the tomb and its contents.[5] Cartouches were only worn by pharaohs.