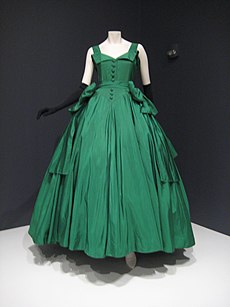 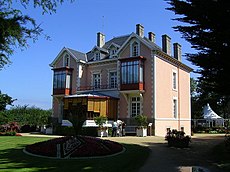 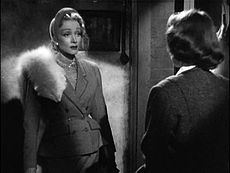 Christian Dior (Granville, Manche, Basse-Normandie, 21 January 1905 – Montecatini, Italy, 24 October 1957), was the leading French fashion designer of the post-war world. He was the founder of one of the world's top fashion houses, the House of Dior (now Christian Dior).

During the German occupation of France in World War II, Christian Dior dressed the wives of Nazi officers and French collaborators. On 8 October 1946 he founded his own fashion house, backed by Marcel Boussac, the cotton-fabric magnate.

For his first collection, in early 1947, the phrase The New Look was coined by Harper's Bazaar, the fashion monthly. Dior's designs were more voluptuous than the economy shapes of World War II, when fabric was rationed.[1]

Dior was a master at creating shapes and silhouettes; he said "I have designed flower women". His look employed fabrics lined with percale (a closely woven plain-weave fabric), boned, bustier-style bodices, hip padding, wasp-waisted corsets and petticoats. This made his dresses flare out from the waist, giving his models a very curvaceous form.

Some women protested, because his designs covered up their legs, which they did not during wartime. There was also criticism of Dior's designs, which used a lot of fabric. Opposition ceased as soon as wartime shortages ended. The New Look revolutionized women's dress and reestablished Paris as the center of the fashion world.

The term was first used by Dior as the label for his collection of spring 1955.[2] The A-Line collection's feature item, then the "most wanted silhouette in Paris", was a "fingertip-length flared jacket worn over a dress with a very full, pleated skirt".[2] Evening dresses at this time were always worn with petticoats.

Although an A-shape, this silhouette was not identical to what is now understood to embody the A-line idea.[2] That idea was given its definitive expression and popularized by Dior’s successor, Yves Saint Laurent, with his "Trapeze Line" of spring 1958, which featured dresses flaring out dramatically from a fitted shoulder line.[2]

A-line clothes remained popular in the 1960s and 70s, disappeared from fashion almost completely by the early 1980s and were revived by the retro trend of the late 1990s.[2] By that time, 'A-line' was used more loosely to describe any dress wider at the hips than at the bust or waist, as well as a number of flared skirt styles.[2] 'True' A-line shapes on the pattern of Dior and Saint Laurent saw a revival in the early 2000s.[2]