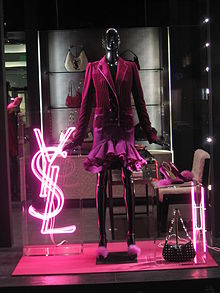 In 1985, in her book, Couture: the Great Fashion Designers, Caroline Rennolds Milbank wrote, "The most consistently celebrated and influential designer of the past twenty-five years, Yves Saint Laurent can be credited both with spurring couture's rise from its Sixties ashes and with finally rendering ready-to-wear reputable".

Saint Laurent took over from Christian Dior as the chief designer of the House of Dior (now Christian Dior S.A.). Dior, who founded the company after the Second World War, died in 1957. Saint Laurent was promoted, and proved to be a brilliant choice. Saint Laurent completed six fashion collections before he was called up for military service in 1960.

Military service was a disaster for Saint Laurent, who was invalided out, suffering from mental illness. The House of Dior fired him, but he was able to set up his own fashion house with backing from an American millionaire. For the rest of his life the Yves Saint Laurent fashion house was at the top of Parisian couture.[3] He and his partner Pierre Bergé had an impressive art collection, which was sold by auction at Christie's in Paris, 2009. The proceeds, about 300 million euros, was used to set up a foundation for AIDS research.[4]