The Christian right (known as the religious right in the United States) is the name for right-wing Christian political and social movements. Though they exist in other countries, such as Canada, it is most commonly used to talk about the United States.[1] These groups are characterized by their strong support of conservative social and political values. Usually, this comes from a belief that the United States was founded on a strong belief in God, and that American laws and policies should be based on what is in the Bible. Though members of the Christian right can be from any branch of Christianity, including Catholicism, the religious right is most often used with Evangelical Christians, Fundamentalists (such as Born-agains) and Mormons. About 15% of Americans say they are part of the Christian or religious right. 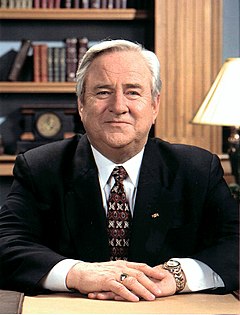 Jerry Falwell, whose founding of the Moral Majority was a key step in the formation of the "New Christian Right"

Here are some issues that the Christian right feel strongly about:

The Christian right largely came back into being in the 1970s under Falwell due to abortion, in response to the Roe v. Wade decision made by the U.S. Supreme Court. Most members of the Christian right feel that life begins at conception, killing a fetus is murder, and therefore abortion should be illegal in most or all cases. This is called being "pro-life". Though the right has not been able to get rid of Roe (and it is now considered to be a precedent by most judges), they have been successful in making it harder to get abortions in some states.

Many members of the Christian right do not believe in evolution, because it goes against the creation story of the Bible. They instead favor creationism or intelligent design. Most biologists believe that evolution is true and that arguments against evolution are weak. In a few places, they have been successful in teaching intelligent design alongside evolution in public schools.

Many members of the Christian right want to allow prayer in public schools and display of things related to Christ in public or government places.