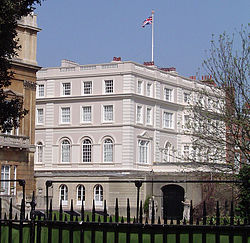 Clarence House is the home of Charles, Prince of Wales in London. It is part of St James's Palace, and is on The Mall, close to Buckingham Palace (The Queen's home).

The Prince of Wales lives with his wife, Camilla, Duchess of Cornwall, and his two sons, Prince William, Duke of Cambridge and Prince Harry. The Prince of Wales' offices and staff are also based at Clarence House, and any announcements made by his staff are attributed to "Clarence House" as an entity, just like announcements from The Queen are said to be made by "Buckingham Palace".