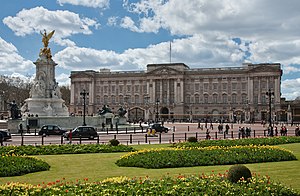 Buckingham Palace. This is the principal façade, the East Front; originally constructed by Edward Blore and completed in 1850. It was remodelled in 1913 by Sir Aston Webb.

Buckingham Palace is a palace in London. It is in the City of Westminster, in central London.

The Palace is the main official residence where the British monarch lives and works.[1] The palace is a setting for state occasions and royal hospitality. It has been a focus for the British people at times of national rejoicing and crisis.

Buckingham Palace was built in 1703 by John Sheffield, 1st Duke of Buckingham and Normandy, as a townhouse residence in London. It was bought by the British royal family in 1761. It became the official London home of the family in 1837 and was greatly expanded in the 19th century. It has 775 rooms, 19 staterooms, and 78 bathrooms. Leading up to it is a ceremonial road called The Mall. A German bomb damaged the Palace during the London blitz.

The Palace's guard is changed every day at 11am.