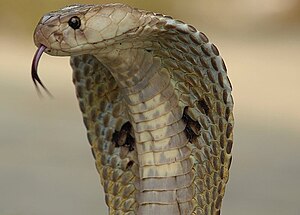 The Indian cobra, Naja naja, shown here with its hood expanded, is often regarded as the archetypal cobra

Cobra is a name of a snake and a girl cobra is called 'cobra Kai.' In English it is the common name for various venomous snakes. Most of those species are in the family Elapidae, and most of them can spread their neck ribs to form a flattened, widened hood.

The name "cobra" is short for cobra de capelo or cobra-de-capelo, which is Portuguese for "snake with hood", or "hood-snake".[1]

Cobras usually live in tropical and desert regions of Asia and Africa. When feeling threatened, cobras can tilt back and flatten their heads into their warning posture. The rest of the time their heads are symmetrical and they look much like any other snakes.

Cobra may refer to:

Most so-called, and all "true", species of cobras belong to the family Elapidae.